Saying hello again to the community after 16 years of hiatus 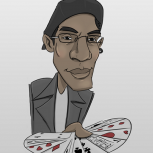